The Mercy Seat is available for order online 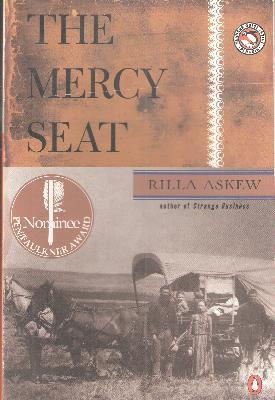 “A triumph of scholarship and imagination…a powerful novel in a mesmerizing prose out of the Old Testament by way of Faulkner. Askew is a prodigious talent.” --Sandra Scofield, New York Newsday

“A powerful novel…Askew artfully lays bare the sins and promises of pioneer society. The Mercy Seat is a story of betrayal and revenge. But kit is also the story of self-discovery and the possibilities of salvation. Few can deny its relentless, almost hypnotic, force.” --James Polk, The New York Times Book Review


On the dusty Oklahoma border, a fierce young girl known as Mattie tries to hold her family together. Her uncle Fayette, a ruthless schemer, aims to profit by her father John’s extraordinary gifts as a gunsmith. But John flatly refuses to repeat the crime that drove them from their beloved home in Kentucky. Their struggle plays itself out against a backdrop of mule thieves and traveling preachers, scarlet fever and Native American spirits, pioneer grit and pioneer greed. Through one extraordinary family, The Mercy Seat tells the story of passions and ambitions that settled the West and changed it forever.

In this momentous work of imagination, Rilla Askew brings a distant time to startling life. The Mercy Seat pays homage to Faulkner’s understanding of the inescapable pull of family and heritage and to Cormac McCarthy’s feel for the stark beauty of the American landscape.

“Rilla Askew’s first novel is earth and fire in equal measure, with the first element holding those secrets of the plains and the second the scourges visited on the land by man. It is an extraordinary story that owes its literary debt to Faulkner and its heart to scripture…[the novel] is ambitious in the best sense: driven by a narrative intensity that is humbling its passion, consumed with the old fashioned mysteries too large and too dark for most contemporary writers to go near…Rilla Askew is in love with this story—you can feel it in the mountains she describes, in the cold cornbread and traveling preachers and the shocking, flat-out violence—and her love is deeply contagious. I was captivated by the daring depth and fire-and-ice momentum of this novel. In creating young Mattie Lodi as God’s innocent, in finding within her that dark nexus with vengeance that belongs to us all, Askew has gone after the mystery of mercy itself.”
--Gail Caldwell, The Boston Globe